As the UN Year of Soils begins, BUND/Friends of the Earth Germany today published the Soil Atlas 2015, which calls for a radical rethink of how much land we use to support ourselves.

The report, co-published with Heinrich Böll Stiftung, the Institute for Advanced Sustainability Studies (IASS) in Potsdam and Le Monde Diplomatique, draws on facts and figures on the significance and the state of land, soil and agriculture around the world, and makes the increasing scarcity of land and soil tangible.

To satisfy the material demands of EU citizens, an area of around 640 million hectares – one and a half times the combined area of the twenty-eight member states – is required every year. About 60 per cent of the land used to meet EU consumption demand is located outside its borders. This makes Europe the continent that is most dependent on land beyond its borders to sustain its consumption patterns, agricultural industry and hunger for energy.

Barbara Unmüßig, President of the Heinrich Böll Stiftung, is critical of the growing demand for land: "The EU is the world's largest importer of land. Most of that land contributes to our intensive meat industry, for which we import huge quantities of feed from countries in the Global South. As a result, small farmers and medium-sized operations are increasingly losing their land and thus the basis for their livelihoods and food security."

"Each EU citizen uses 1.3 hectares of land annually – that's equivalent to two football pitches and six times the amount of land used by a citizen of Bangladesh. Given the critical food situation in many countries, this flies in the face of justice and is also ecologically untenable. In this context, not only are European consumers called upon to adopt more responsible consumption habits, but there's a particular onus on politicians to act: the EU and Germany must rethink their agriculture policies and incrementally end industrial animal production," stressed Unmüßig. 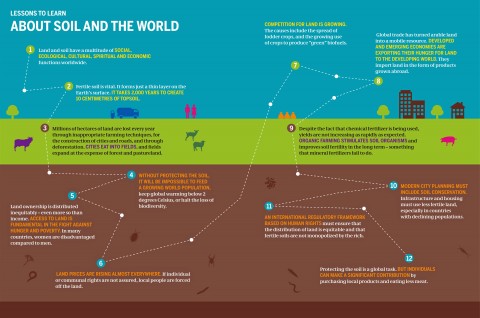 The one-sided agricultural policies of the EU and Germany have had detrimental effects on land use. They have largely promoted the growth of large-scale agricultural operations and the concentration of land ownership in the hands of few, especially in Eastern Germany and Eastern Europe. The rise in the price of farmland is a further consequence of this land concentration. Within the last ten years, land prices in Germany have doubled, while increasing by 1,800 per cent in Romania.

"Small agricultural businesses and small farmers and are often forced to give up their livelihoods, as they are no longer able to compete" said Hubert Weiger, chair of BUND. "Abetted above all is the trend towards the concentration of agricultural land in the hands of large corporations and national states."

The editors of the Soil Atlas 2015 would like to demonstrate in the UN Year of Soils, why the protection of soil is important to us all, and how to achieve more effective soil protection. A more just and sustainable land and soil policy is worthwhile. At an everyday level, citizens can make a contribution by considering soil protection and land use in their day to day purchases.

The Soil Atlas 2015 can be downloaded at:
www.boell.de/en/soilatlas

Meat Atlas: facts and figures about the animals we eat (January 2014)