The rate of species extinction now being caused by humans is 1,000 times faster than it would be naturally. We are all dependent upon a healthy planet, and the world's natural diversity is crucial to this, yet we continue to destroy the very systems that provide us with clean water, fertile soil and fresh air.

Despite global and European targets to stop biodiversity loss by 2010, biodiversity loss has not even slowed down. Weak implementation of European environmental legislation, increased pressure on land use, insufficient management of protected areas, and a lack of finances all contribute to this. Biodiversity is a public good - it is vital for our health and wellbeing, but also taken for granted – its value is not properly reflected in European decision processes, and biodiversity concerns are not integrated into other policies.

Clear and measurable targets for halting biodiversity loss by 2020 have been set out on both an international (Convention on biodiversity) and European level (EU biodiversity strategy).

Friends of the Earth Europe supports these strategies, their targets and related actions, but urges European countries to act to avert global biodiversity loss. They must increase finance and redirect incentives so they support biodiversity, and create increased public awareness, paired with public participation, or the targets will be undermined.

Dangerous false solutions, such as industrial farming and forestry, agrofuels, and the commodification of nature must be avoided. Progress towards the biodiversity targets must be monitored so we always know where we stand on the way to their achievement.

Europe must show it is seriousness about tackling biodiversity loss.

Friends of the Earth Europe is campaigning for the Right To Nature - and to put nature protection at the heart of European and international debates and policies. We work alongside our national groups who campaign at a local level to raise the profile and importance of biodiversity – to preserve our planet's vital diversity for future generations.

This campaign is part of our Food, Agriculture and Biodiversity Programme to halt biodiversity loss and to challenge unsustainable food and farming. We advocate for an ecological and fair agriculture that protects wildlife and natural resources, supports family farms, and reduces our impact on developing countries. We coordinate four campaigns: to protect biodiversity; reform the European Union's agriculture policy; promote agro-ecology; and halt the growing of genetically modified crops. As part of our vision, we play an active role in building a movement for food sovereignty. 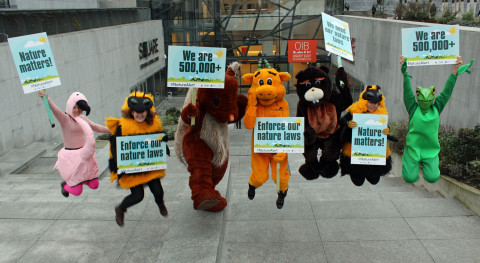