The energy transition is happening, but it is not yet working for people nor is it socially-fair.

We need to transition to a democratically controlled, people and community-owned energy system that lifts people out of energy poverty, and does not leave workers behind.

This means a transition that is not paid for by the most vulnerable citizens. This means no bail-outs for big energy companies in a changing energy context.

Friends of the Earth Europe believes the energy transition cannot happen at the scale and speed needed if we don’t connect truthfully the environmental and social movements, and call for a radical social and political shift. The argument of lost jobs is often still used by the fossil fuel industry to challenge the post-carbon society, especially towards workers and their communities.

The real choice is not jobs or environment. It is both or neither.

In the late 1990s, trade unions coined the phrase Just Transition which led to the development of a framework of policies designed to protect the jobs and livelihoods of workers and their communities in the transition to a clean, safe energy system – in particular for those who are vulnerable to unintended negative consequences of climate policies.

A just transition is about protecting the workers and their communities currently dependent on jobs in high carbon sectors like oil, coal or gas. It does not mean bailing out big energy companies for their stranded investments in fossil fuels. It is about protecting workers in key sectors, including those in the chain of fossil fuel extraction, generation, distribution and supply. In a just transition, citizens are actively involved in decision-making. 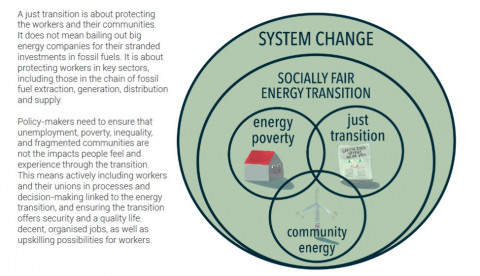 Friends of the Earth Europe is working together with partners in the trade unions on strategies and policies that can bring about a Just Transition. Over the past years, together with Friends of the Earth International, we have been built a strong alliance with labour unions and their European and international confederation (International Trade Union Confederation Just Transition Centre) as well as with the Trade Unions for Energy Democracy.

This has led to joint statements, public actions, and joint public events. The dialogue is continuing and turning now into direct changes on the ground like we see in Scotland for example.

Political decision-makers need to ensure unemployment, poverty, inequality, and fragmented communities are not the impacts people feel and experience through the transition. This means actively including workers and their unions in processes and decision-making linked to the energy transition. And it means ensuring the transition offers security and a quality life: decent, organised jobs, as well as up-skilling possibilities for workers.

Far too often the interests of workers and environmentalists have been pitched against each other, when fundamentally we share the need for a liveable planet and societies based on environmental, social and economic justice.

Decent jobs on a living planet!