To be effective at combatting climate change, achieving social justice, protecting biodiversity, and ensuring a just transition, we need to ensure politicians put in place the right – not just any – climate solutions. Otherwise the door will be left open for false solutions like nuclear power, the roll out of natural gas as a ‘transition’ fuel to replace coal, unsustainable bioenergy, carbon capture and storage, or failed carbon markets and offsets.

These technologies and policy prescriptions will not deliver sufficient long-term emissions cuts, nor environmental and climate justice.

A whole flurry of unproven and ineffective false “solutions” are being promoted by industry to hold back the energy transition and keep us hooked on fossil fuels.

Nuclear is too dangerous and unpopular, as Fukushima has shown us. It is also prohibitively expensive – this is not where we should be putting billions. Nuclear plants are also not sustainable in a warmer world. And there is no safe, long-term solution for the storage of radioactive waste. Nuclear cannot deliver safely, or within the required time period. Despite this, several large-scale nuclear projects are underway in the EU.

Energy companies are currently pursuing several bioenergy sources with a worse carbon footprint than fossil fuels. These also represent a false solution and accelerate instead of mitigate climate change. Burning whole trees for electricity in coal installations is damaging to forests, extremely inefficient and makes no environmental sense. And burning crop based biofuels for energy contributes to significant greenhouse gas emissions due to the destruction of natural carbon sinks as a result of agricultural expansion. It also fuels conflicts over land use. 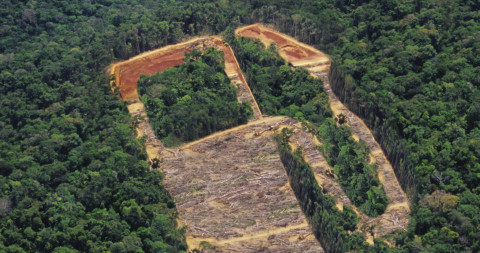 The European Union is also keen to encourage the replacement of coal power plants with natural gas. Gas is marginally less dirty than coal, but it still releases dangerous quantities of carbon and methane, which our atmosphere cannot afford, and it still locks Europe into an unsustainable fossil fuel system. A study, commissioned by Friends of the Earth Europe, shows that EU countries can afford just nine more years of burning gas and other fossil fuels at the current rate before they will have exhausted their share of the earth's remaining carbon budget for maximum temperature rises of 2°C. Promises of ‘green gas’ are unproven and costly.

Unconventional gas sources – such as shale gas – are also not a solution. The lifecycle greenhouse gas emissions from burning and extracting shale gas make it even more damaging than coal. The International Energy Agency estimates the development of shale gas would drive climate change ‘well above the widely accepted 2°C target’. On top of this, unconventional gas is linked to air and water pollution, and significant health threats. 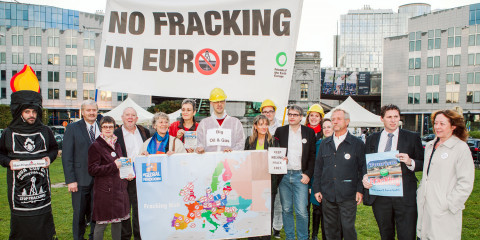 Carbon capture and storage (CCS) is not a viable alternative either. CCS is a 20th century concept, designed for cheap and plentiful fossil fuels. And because extra energy is needed to capture, transport and store CO2, CCS increases reliance on fossil fuels. It is a hot topic for big energy companies because it represents for them the hope that they can keep alive the current energy model.

Bioenergy with carbon capture and storage (BECCS) combines large scale bioenergy and CCS, so even if it worked at scale (which is unproven) to actually bring about substantial negative emissions, it would require a large proportion of all the world's cropland. 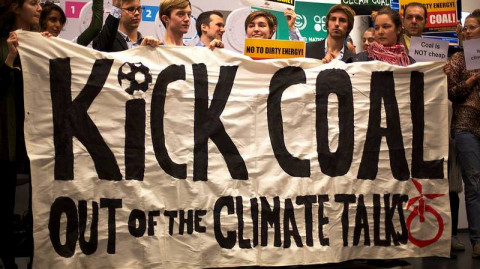 Rather than being genuine solutions, these false solutions are, at best, a waste of time and money. At worst, they create new dangers. The fundamental fact is that we have to make the transition to a fully fossil free energy system which does not rely on fossil fuels.

We cannot solve our problems with the same thinking that landed us in this mess. Often, the first solution to climate change proposed by politicians and the fossil industry is a new market – carbon trading.

The world’s first carbon market is the EU’s Emissions Trading Scheme (ETS), launched in 2005, where carbon pollution permits are bought and traded. But so far, the price for pollution has been intolerably low; human error has resulted in huge fluctuations in the carbon price; fraud has led to millions of emissions permits being stolen, and polluting companies have received windfall profits through the allocation of free emissions permits. The system has failed. Despite this, similar schemes are being conceived all over the world.

Regulation, taxation and subsidies are more effective at delivering the scale and speed of emissions reductions necessary to avoid catastrophic climate change. Friends of the Earth believes it is time for the European Union to recognise that the ETS is failing. Rather than depend on this uncertain, ineffective, and unfair system, the EU must privilege other forms of action. This means stronger laws to cut emissions such as national climate laws, restrictions on fossil fuel extraction, developing renewables, and increasing energy efficiency.

In a carbon trading system, also known as 'cap and trade', governments set a limit on the amount of emissions allowed within a given period – the 'cap'. Permits giving the right to emit CO2 are then auctioned or allocated for free to industries covered by the scheme. If a company emits more than it has permits for, it must buy extra from another company who has surplus – the 'trade' element.

But the system is flawed. Because carbon trading incentivises the lowest cost reductions first, it leaves the hardest changes until last, locking-in high carbon infrastructure.

The carbon price required to stimulate investment in low-carbon technology or make renewables truly competitive is much higher than has been delivered by carbon markets. Intervention to ensure carbon prices are at the levels required would be politically unpopular.

This means carbon trading is locking us onto a dirty, high carbon path and a continued reliance on fossil fuels. It is undermining our chances of avoiding catastrophic climate change by delaying the much-needed transformation of our economies away from fossil fuel use.

The faster we recognise the market will not be a magic response to the climate problem, the faster we can move on to the solutions that have proven their merit.

Carbon offsetting is a system where countries with emissions reduction targets, rather than taking action to reduce their own emissions, pay for projects in other countries to reduce other emissions instead.

The theory behind offsetting is that it doesn't matter where emissions reductions take place, as long as they do. However, it is very difficult to prove that carbon offsetting generates net reductions. Offsetting schemes also cause significant social and environmental problems. It is an escape hatch for countries and companies to avoid making urgently needed emissions reductions.

Cuts in greenhouse gases need to take place in all major-emitting countries in order to successfully tackle climate change. Offsetting delays the urgent domestic changes which are necessary in rich industrial countries in the Global North, who are largely responsible for climate change. It can lock-in high carbon infrastructure, making the later transition far more difficult and expensive.

A central problem is that of additionality. It is impossible to show that emissions reductions through offsetting projects would not have taken place anyway. Without this guarantee the net effect is that greenhouse gas emissions increase, because offset credits allow rich industrial countries to continue to pollute. And it is difficult to know how much carbon has been saved, because it is judged against a hypothetical future, which cannot be verified.

Carbon offsetting is fraught with scandals. There is a perverse incentive to produce extra emissions in order to get paid for reducing them. Some industries in poorer countries are deliberately increasing the production of greenhouse gases thousands of times more powerful than CO2, only to destroy them and receive millions of euros in payments.

Beyond such frequent scandals, offsetting projects are often used to subsidise small improvements in fossil fuel power stations and carbon-intensive industry, rather than a genuine move to a low-carbon fossil-free economy.

Offsetting allows industrialised countries to continue using the little remaining atmospheric space available, denying developing countries the right to use this to develop and bring their populations out of poverty. 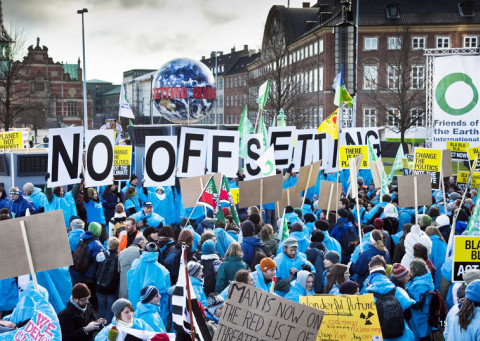 For these reasons, Friends of the Earth Europe opposes all forms of offsetting, carbon trading, and false solutions. We are campaigning for the EU and national governments to make genuine emission cuts at home, to create an energy system in Europe which is fossil free by 2030, and to invest in real solutions to the climate crisis. We are resisting these false solutions and working to transform the energy system to one that uses much less energy and the energy that is produced is clean, sustainable and people-centred. 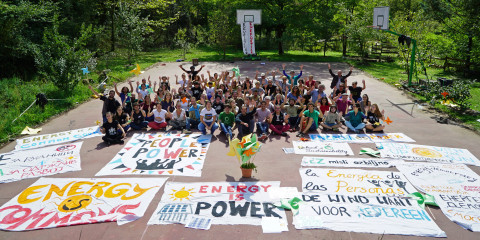