50,000 demonstrators out to defend forest and climate

In a dramatic show of people power, an estimated 50,000 people gathered on Saturday (6 October) to defend Hambach Forest and the climate.

Under crisp sunshine, they demanded an end to coal in Germany, a clean climate, and the protection of the ancient forest at threat from coal mining expansion.

Organisers of the march – BUND/Friends of the Earth Germany, Campact, Greenpeace, and Nature Friends Germany – were overwhelmed by the massive level of support, the largest mobilisation against dirty coal in memory. It was a non-violent protest with a clear message: ‘we will end coal!’

The march came on the eve of a flagship UN review of climate science, focusing on the impacts of 1.5°C of global warming, which showed the urgency and scale of ending the fossil fuel age to stabilise the climate. And it forms part of a Week of Action for climate justice, with mobilisations across the Friends of the Earth International Federation.

Hubert Weiger, head of BUND/Friends of the Earth Germany said:

“Saturday was the beginning of the end of coal in Germany. More than 50.000 people marched against coal in Hambach Forest in Germany. I have never seen the climate movement as strong. We sent a clear signal against coal and for far more ambitious climate action. Now, the window of opportunity opens to negotiate the phase-out of coal and a just transition in coal regions.” 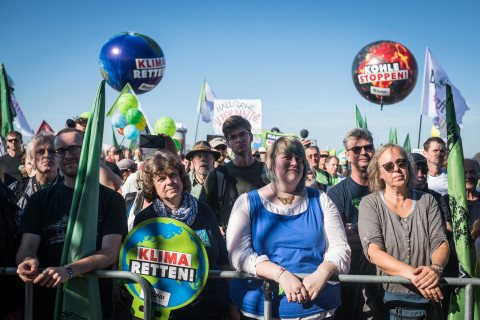 One day earlier, RWE, the German energy giant planning to expand its open cast lignite coal mine into the last area of the ancient forest, suffered a double setback. First, the demonstration, which had been declared illegal by local police, was approved in a fast decision by a local court.

Then the Upper Court of Nordrhein-Westfalia ruled that the Hambacher Forest cannot be deforested to expand coal mining, until a legal review has taken place in February 2019 at the earliest. This was the result of a BUND/Friends of the Earth Germany legal case which challenged the tree clearance, based on the fact that the biodiversity of the ancient forest should be protected under EU nature legislation.

“We have managed to win a reprieve for the forest through our court application. RWE is not allowed to clear the forest. The future of the Hambach open cast mine remains to be decided, but for now RWE can’t take any further steps to clear the forest. The court ruled in favour of BUND/Friends of the Earth Germany’s application because the forest is so valuable to nature and the clearance would have created irreversible damages. RWE couldn’t proof that forest clearance and coal mine expansion is necessary to continue a stable energy supply for the region and the country”

“We are relieved that the clearance is off the table for now. It is a great success for nature protection and a great signal for non-violent protests in Hamabch Forest and beyond. The court has ruled in favour of justice.”

In Germany a coal exit task force (‘Coal Commission’), made up of government, industry, trade union, and NGO representatives (including BUND/Friends of the Earth Germany), is currently discussing when and how to phase out this polluting fossil fuel from Germany’s energy mix. RWE had seemed intent on pre-empting the outcome of the commission by pressing ahead with its lignite mine. 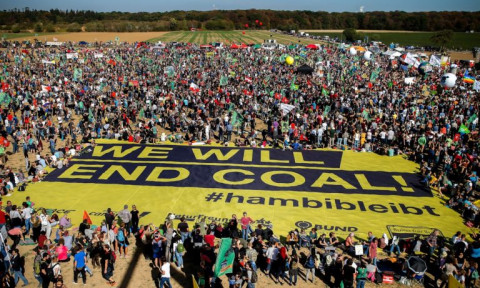 The campaign to save Hambach forest and end coal in Germany has fostered an enormous amount of international solidarity and mobilisation across Europe and beyond, and is a sign of hope that the growing movement of people fighting fossil fuels and implementing climate solutions such as community energy is growing stronger and stronger.

Mobilisations demanding an end to coal in Germany are expected to continue in the coming months. This is a shining example of how people power is rising up for a fossil free Europe, and how citizens are leading the way to a safer climate future.